The Owen-Shearer ‘Feud’ – Real Or Just A PR Stunt?

You hear of these sorts of publicity stunts all the time.

When people in the spotlight begin a fake feud with someone else just as famous because they know it’ll blow up in the media and on social media – in turn doing wonders for their profiles. And whatever they just happen to be promoting at the time.

Now it’s unlikely we’ll ever know if it has been staged or not – but we wouldn’t be shocked if all the tweets were fabricated.

The entire argument is based on what Michael Owen has written about Alan Shearer in his new book.

They’ve apparently had their differences since the 2005 season, in which Newcastle got relegated and Shearer accused Owen of not wanting to play in case he got injured – this would have scuppered his chances of move away from St. James’ Park that summer.

In the book he questions Shearer’s dedication to Newcastle and claims he was just ‘inches’ away from a move to Liverpool that fell through. Lucky escape I’d say.

We all now know that Michael Owen has a new book out. And an argument like this, between two of England’s finest ever forwards, is guaranteed to pull interest.

As fans we don’t know half of what goes on behind club doors. It’s always noteworthy when an ex-pro gives us an insight into what it was or is like – nobody had a clue about Shearer’s supposed move to Liverpool, and at the time it would have certainly been back-page material.

Ultimately Michael Owen wants us to buy his book.

If the argument is real then it might be quite interesting to hear his take on it all. But to do that you’ll need to buy the book.

And that means more ££££££ for Michael. And maybe Alan Shearer.

What others have said

Gary Neville quoted one of Owen’s tweets, the caption reading ‘Relax Micheal (sic) sales are going up.’ (See screenshot below) 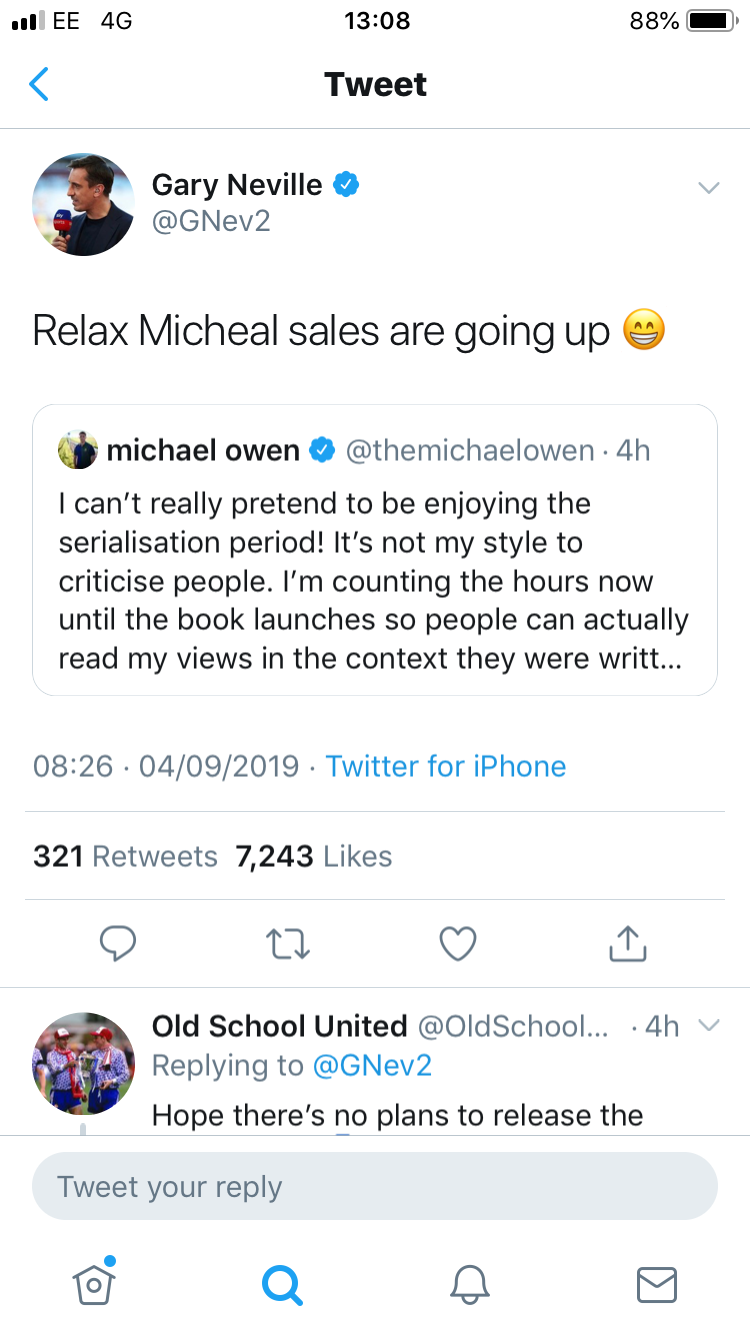 “Relax Micheal, sales are going up.”

Now we’re not saying anything like this has happened, but would you be shocked to hear that Shearer was pocketing a percentage of the profits to play his part in a publicity act? Probably not.

And we’re not saying it’s bad either. It’s a great idea.

An embellished dispute between two high-profile ex-pros that gains huge exposure and in turn generates much more in sales than Michael Owen could have hoped for is almost artful. As marketers we can appreciate an inventive strategy and how effective this one could turn out to be.

It might just be part of the play. It’s wrong in the sense that it’s manipulating the public into buying a book for something that isn’t true, but everyone seems to fall for all the other celebrity nonsense out there so why not fall for one more?

Maybe ‘more sales than he could have hoped for’ is unfair, but you understand the point we’re trying to make.

Marketing is marketing. You do what you’ve got to do to push what you’re selling out to the people that might buy it.

The word of mouth off the back of this quarrel will be huge. We’re all now talking about what’s going to be inside Michael Owen’s book, thousands are tweeting about it and I’m writing this article, so the clash has prevailed so far.

More people are discussing the book than likely would have done had this whole episode not come about. The tweets have amassed more than 100,000 likes and 50,000 retweets (at time of writing) and the impressions count will be way higher.

Michael Owen and his book are top of mind. And if you’ve read our blogs on why things go viral you’ll know that top of mind means tip of tongue – which, if you’re selling something, is what you want.

Now, we also understand that we might be way off the mark and that the tweets may well not have been planned.

If so, we hold our hands up.

We do all love a conspiracy theory though – it might not be as juicy as who shot JFK, or as engrossing as aliens in Area 51, but for a rainy Tuesday afternoon it just about sufficed.